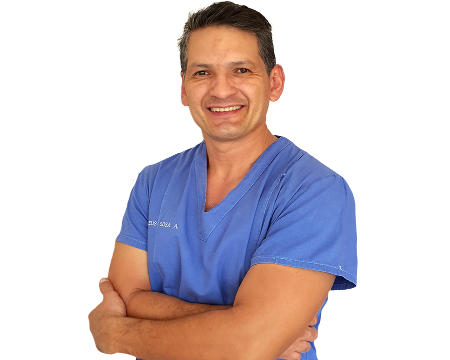 Our eConsultation service is currently only available for use on PCs.

The outstanding Dr. Zeus Sosa Acuña is a specialist in Periodontics and Implantology of the High Level. He trained at the University of the Army and Air Force (UDEFA) as a Dental Surgeon , the same institution where he later concluded the Specialty in Integral and Emergency Dentistry and Periodontics .

His extensive experience has allowed him to be part of the medical staff of important medical institutions such as the Mediland Clinic and his office located in Benito Juárez . He is an expert in Dental Implants , Periodontal Surgery , Gingivitis , Periodontitis , Emergency , Dental Prosthesis, Dental Aesthetics and Periodontal Plastic Surgery , among others.

Thanks to this, Dr. Sosa Acuña is distinguished as a specialist in Periodontics and Implantology in Mexico City and the State of Mexico .

• More than 15 years of experience

See all
Source: All information contained on this page as well as office hours available, are provided directly by the doctor who has the ability to update them at all times in order to keep the information as accurate as possible.

Some insurance providers will cover e-Consultation services, but please check with your provider directly before proceeding to book your video conference or private messaging session.
The selected service is priced at:

All e-Consultation sessions are recorded for indemnity purposes and are in line with GDPR. You are about to engage with your chosen Doctor and you will be responsible for the charges levied by the Doctor. Remember, if you feel ill and you need immediate assistance consult a medical professional immediately or phone 999. The National Health Service may provide support free of any charge within the area of practice where you are seeking assistance.

Enter the code you received on your mobile to verify the account.

SMS code
Haven't received the SMS?
Are you new to Top Doctors?